It’s been a while since I’ve blogged. For reasons beyond and within my control. The reason I wanted to blog in the first place was to get to know you and my music better and that is happening albeit a bit different than I anticipated. Things are still moving along according to plann with my CD to be released in November, so that is a very good thing. As you’ve been watching I’ve been creating one minute thirty second videos from the studio to coincide with my blogging. This has been a blast and has been going very well until the day before my vacation, my computer crashed. : ( Wasn’t expecting that one! But that is a part of life and the recording process. “Even the best laid plans” I think is the phrase that pays here. All is saved and back in order and I didn’t lose anything for the recording because I continually back up, however it did put me in a place of just letting go. Nothing I could do about re-loading and re-installing until I got back from vacation, so the departmentalizing part of me kicked into gear and said “To the beach Rhon!!!”.
I could sell timeshare in Upper Michigan. It is my peace on the planet to look out and see nothing but water as far as the eye can see and inhale the smells of the water, the trees and still hear the voice of Tim Allen saying “Pure Michigan” in the backround. Time away, a good thing for all. Even if it’s in your back yard looking up at the stars and seeing the devine creation around you. It’s good for the soul! So I’ve included some pics that will give you an idea of how things around us move me. Sometimes to write about it, other times just to breathe it in and be inspired.
I used to abhor Mondays, but now I am motivated by them to get up and “Just Do It”. So a video is being mixed as I write this and back on the road to fruition I ride. Again, I’m very thankful for you and your support of my music, so onward we go. 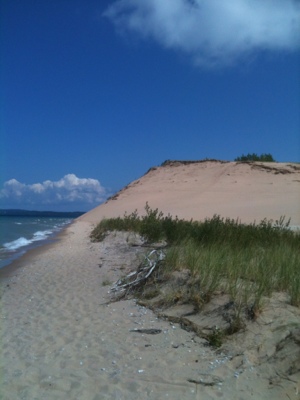